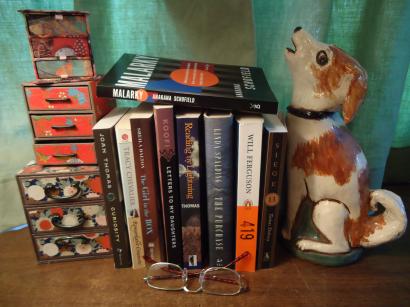 A friend recommended Joan Thomas’s Curiosity, a book I’d long been thinking of. I ordered it, fell in love with it from word one. Well, from sentences one and two.
“They were powerful charms, curiosities. People who came to Lyme Regis to take the waters would pay six-pence for the meanest little snakestone and carry it for luck.”
I was hooked, and set off into this reading adventure with high hopes that were – I’ll declare right at the start – more than fulfilled. I found it hard to put Curiosity down. And this, despite the slight miasma that had hung over the novel for me, before I actually held it in my hands.
The circumstances of the publication of Curiosity were, as I recall, unfortunate. This must be a novelist’s worst nightmare, I remember thinking at the time. A novel not merely on the same subject had been published just months before, but that other novel, Remarkable Creatures, (an immediate New York Times best-seller) was by the already internationally recognized Tracey Chevalier, author of Girl with a Pearl Earring among other best-selling, novels. I felt sure that Tracey Chevalier must have been equally dismayed: for Joan Thomas’s earlier debut novel, Reading by Lightning, had also won international acclaim as winner of the Commonwealth Prize and the Amazon.ca First Novel Award, and been longlisted for the IMPAC Dublin Literary Award.
But perhaps both Tomas and Chevalier were able to appreciate how strangely fitting it was, that two novels should be simultaneously published which — though they dealt with the same set of established historical facts — managed to tell almost completely different stories: because the scientific discoveries at the heart of both these novels were, in their day, so wildly divisive and controversial.
The central character of both novels is Mary Anning, a cabinet-maker’s daughter who – some 40 years before Darwin published On the Origin of the Species – discovered several intact skeletons of prehistoric creatures in the clay cliffs of Dorsetshire, discoveries that set the social and scientific and religious communities of the time ablaze with controversy.

Anyway, I gobbled up Curiosity. Such a vivid and beautifully written picture not just of life in that place and in those times, and of an “uneducated” but highly intelligent young girl’s scientific obsession – which strikes me as the kind of obsession that lies at the root of all creativity – but indeed of the vagaries of the human heart.
Then, itching with curiosity myself, to see how Chevalier handled all of this, I had to order Remarkable Creatures, of course.

Well.
What a fascinating look this was, first of all, at the challenges of writing a historical novel.
I emphasize the word “novel”, for though I’m sure the writing of any history is challenging — facts tending very quickly to become coloured by the unearthing of new facts, or revisionist points of view – the making of believable fiction out of historical characters whose inner lives are lost to us, and have probably always been lost to view even by their contemporaries – presents such a different set of challenges, nowhere better demonstrated I suspect than in a comparison of these two novels.

But here’s what I’m having trouble with, now.
I fell in love with Thomas’s version not just of the “facts” but with her story of the lives that surrounded those facts, the lives of the characters who had become so real to me that when I encountered them again in Chevalier’s novel, often with very different attributes, I kept wanting to say, “But hang on, this isn’t true…!”
And I wonder — and will never know — would it have been the same, if I’d read the novels in the reverse order?

While Curiosity is written almost completely from two points of view: that of Mary Anning, and of Henry de la Beche, who barely comes into Chevalier’s novel at all, (and with just the tiniest dip into the inner life of the “middle class spinster” Elizabeth Philpot, who in Chevalier’s novel plays a dominant role) – and while in Curiosity there is a beautifully depicted swirling undercurrent of an almost non-“realized” love story between Anning and De la Beche, the sort of “love story” that haunts, I think, so many lives, then and now: the love story that – but for life’s realities – might have been … it is the voice of “middle class” Elizabeth Philpot that dominates Remarkable Creatures, and though she is depicted as a woman valiant, intelligent, and ultimately heroic in bringing to Mary Anning some of the recognition her discoveries deserved, it is a much dryer picture that we get through the Philpot lens, of Anning’s life and family and obsession with discovery and, yes, of Anning’s heart. And even in the sections told in Mary Anning’s voice, it is a much dryer voice than the voice of the Mary I fell in love with, in Curiosity.
So it seems I was prejudiced in favour of Curiosity from the moment I opened Chevalier’s novel, because I had already adopted all of Thomas’s fictional truths.
But perhaps that’s always the way with “truth”? Could it be that getting “the last word in” isn’t in fact as convincing as getting in the first?

I’d love to hear from others, who have also read the two novels, only in the reverse order. Or who have broader thoughts on the makings of historical fiction.

In my next post I will talk a bit about some of the other novels listed above – before I get overtaken by my June reading altogether.

To check out previous posts, please click on the “subject titles” at the very top of this page (in small black type). These are individual clickable links that lead to other “Recent Reading” pages.

And please remember; I love comments and discussion. If you feel so inclined, write me via my “contact’ link on the menu to the right.