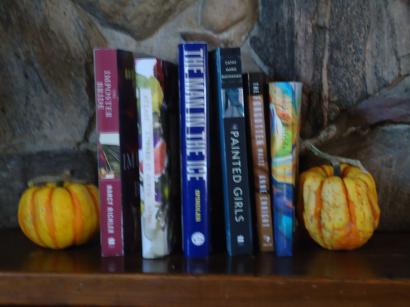 WHAT IS IT that makes a novel stay in the memory? Why do some disperse so quickly – thin out, the way a cloud does – leaving misty remnants snagged here and there (…But what was that? Where did I read that…?) sometimes to be recalled through a laborious process, other times just … gone.

“Is there a line here?” she asked.
Who?
She was talking about makeup, “foundation”; this much came back to me earlier today as in the bathroom cupboard I spotted some foundation of my own that I’d bought and never used.
“Is there a line here?”
Two sisters heading to … a funeral? And one sister asks the other whether there’s a line where the makeup stops, just below her chin? What is happening to my brain? I read that just a day or so ago. Where?
Oh.
It was Anne Enright’s The Forgotten Waltz.
Perhaps in the circumstances aptly named?

NOW HOW could I have forgotten a novel so thick with semen-sticky sex: a novel of obsession described as love, yet love seen so clearly for what it was; a novel a-jitter with mordant Irish wit, and despair, with the damage that marital infidelity can inflict on a child, and that a child can inflict on a marriage, yes, and on any relationship that comes after. Surely it’s a comment on my own psyche and not on the brilliant (Booker-winning) author that this novel slipped away – dispersed — literally from one day to the next – sandwiched as it was between Cathy Marie Buchannan’s The Painted Girls and Holley Rubinksy’s South of Elfreda.

THIS IS THE PENALTY of reading avidly, perhaps. Avidly and greedily. Chomping down on one book — then on to the next. A penalty that shows the benefit (perhaps) of the project I’ve taken on this year, of listing all the books I’ve read, month by month, and writing a little about the ones that particularly do stay with me.
Ironic, then, that I’m starting out by writing about the one that didn’t.
I’ve been churning the matter over ever since. Why should an acerbic, gritty (Booker-winning) book – a trenchant observation not just of love in a time of loss (loss in a general sense: of jobs, money, homes, self-worth, as the Irish financial bubble collapsed in 2008, as well as the more particular loss, as “love” pulls two marriages apart) – why should that roiling grey and desperate story just disappear for me, from one day to the next..?

THE MONTH STARTED with Nancy Richler’s The Imposter Bride: so deftly woven — several generations of one family in the Jewish section of Montreal — the story focusing on an incident just after World War II, when a refugee bride arrives with a stolen identity. A story that peels back the surface of never-spoken-of horrors, yet shows how that surface may be knitted up again with humanity and warmth — not in truth forgotten, but the unspeakable depths transmuted, at least for some, by the business of simple and honourable daily living — the telling of all this so rich and vivid that I know it will live with me.

THEN I PICKED UP At Last by the much-lauded British writer Richard St. Aubyn, read three pages and threw it across the room. That’s the great thing about real, non-electronic, books. You can throw them across the room.

THE MAN IN THE ICE by Kondrad Spindler, then, the fascinating story of the discovery, high in the Alps, of the body of a man who lived roughly five-and-a-half thousand years ago. A most intriguing account, first of the discovery of the “corpse”, which emerged from the glacier after a thaw, then the business of trying to identify it by the police (a lost hiker? A murder victim?) the body in such good condition that it was presumed the death was recent – then the further intrigue (and much bureaucratic bungling) as at last the archaeologists were called in…. An amazing discovery, casting new light on the remarkably advanced life of “Neolithic Man”. For along with the body were discovered his ingeniously padded winter clothing, his pack which had carried live coals for starting new fires, his tools and weapons…. More proof of the respect we should be paying to our early ancestors, who were, it seems, not just as smart as we are but maybe even smarter, and amazingly ingenious at coping with the realities of their lives, without any of the add-ons that we now take so for granted.

FROM THE CHILLY Austrian/Italian Alps of 5 millennia ago, it was a grand balletic leap to 1870’s Paris of the Belle Époque, thanks to Cathy Marie Buchanan’s The Painted Girls — the fictionalized story of Marie van Goethem, the model for the famous “Little Dancer” of Degas. This novel is deeply researched, skillfully realized, full of the sights and sounds and smells of that city in those times: the poverty-stricken, struggling, day-to-day world of the Van Goethem sisters, the “demi” world of bars and brothels — and the world of the Paris Opera – the front-stage glamour contrasted with the stark realities of life backstage and in the wings, the hardships — and excruciating discipline — this world demanded of the little girls, and bigger girls, who, if they were lucky, became the ballet chorus: and sometimes, rarely, the stars.
The plot moves on coiled springs, like the Dickens, I’m tempted to say: and if sometimes the back-and-forth ticking seems too regular, I’m hard-pressed to think what technique would serve this narrative better. I loved this book, which I read at break-neck speed, though I knew I’d be sorry to leave it behind.

THEN ANOTHER LEAP, into the very different world of Holley Rubinsky’s story collection South of Elfrida, which I’ve reviewed elsewhere thus:
“Set largely in desert communities just north of the Mexican border, where the quotidian can give way to blazing sunsets, enormous silent stars — and deep in the personal heartlands of what it is to be no longer young, and never perfect — the stories in South of Elfrida lead us through the latitudes of loss and desire, in the company of characters brave, gritty, witty, and very real — sparking insights that keep glowing long after the book is closed.”

“OHO!” YOU MIGHT SAY, “but she’s done it again. She’s forgotten that between those last two, lurked The Forgotten Waltz.”
No.
I’ve been mulling that conundrum all along. Why did just one phrase snag on something in my daily life, to bring the experience of reading that novel back?
“Is there a line here?”
In truth I’ve leafed through the book several times since, trying to find that phrase – trying to quote it accurately – and haven’t located it. But in my leafing, I have found so many phrases and descriptions both apposite and sharp, that now … One two three … One two three … I’ve started over again from the start….
The power of one small snagged (nagging) phrase?

HAPPY READING TO YOU ALL.
SEE YOU IN APRIL.