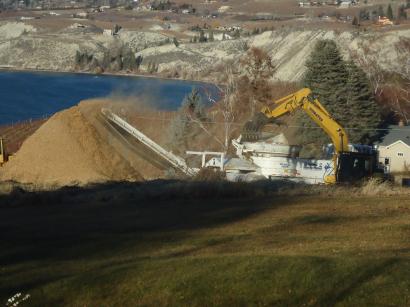 Re: ALR to blame for Vancouver’s unaffordable real estate)
(Published Jan 21, 2014, in Business in Vancouver)

I am writing you once again with concern about threats to the Agricultural Land Reserve.

As you may recall from my earlier letter of November 19th, I was appalled to learn of a proposal — by none other than your Agriculture Minister — that the Agricultural Land Commission’s mandate be “expanded” to take “economic development priorities” into account, and suggesting that some of the Land Commission’s powers should be switched over to the Oil and Gas Commission.

Though a reply from your Ministry stated that the Government “understands the ALC’s independence” — there has been no further assurance that such an Orwellian “expansion” of the ALC’s mandate was not, in fact, still under consideration by your Government.

Now, the above article in Business in Vancouver makes it clear that the long guns are out, in the Development world. Their propaganda machine is starting to churn. (See link at the end of this letter.)

I hope you and your Government will not heed this nonsense. Where on earth is our food supply to come from — what are the people in those new houses going to eat — if we allow developers to play the “affordability” card by gobbling up our irreplaceable farmland?

“Affordable” sure, but principally for those developers who do not want to adopt Smart Growth principles, who do not want to go to the trouble or expense of adapting to the necessary challenges of densification that will allow our cities to grow while at the same time ensuring an affordable food supply for the future.

Premier Clark, thank you for your attention to these concerns,

Below, see link to article mentioned above:
article: