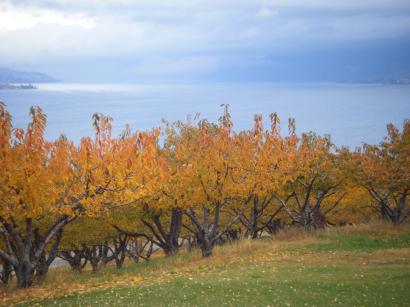 IF YOU SAID “WHEW!” YESTERDAY, on reading the statement, in the Globe, by B.C. Cabinet Minister Bill Bennett, vowing that the Agricultural Commission will not be disbanded, “despite a leaked document that recommends its demise” — I hope you will take another look at that article, scanning the fine print.
“It [the Commission] will remain independent and it will continue to protect good agricultural land…” Bennett stated.
(My emphasis on “good”)

The Globe article went on to quote Mr. Bennett as saying that only two small Crown agencies will be brought directly under government control.
But the rest (including the Land Commission) are actually still, it would seem, in limbo — pending the resolution of Mr. Bennett’s core review.

THEN, USING WHAT’S HARD NOT TO THINK OF AS WEASEL WORDS, in an interview later, Mr. Bennett said the independence of the Commission will be protected, but other aspects of its work could still be changed under the terms of his efficiency exercise. “They are still creatures of the government,” he said.
Independence will be protected? But some independence will be more protected than others?
Are we wrong to think there’s something eerily Orwellian about this?

IT WOULD BE WONDERFUL if everyone who values the concept of a sustainable future for our farmland could take a few minutes to write to the Premier letting her know how important it is to keep the Agricultural Land Commission as an independent body, truly at arm’s length from government control.
Below you will find my own open letter to the Premier, sent yesterday, giving background to some of these issues, and also providing the Premier’s contact e-mail and mailing address.
Do take a moment to write, if you can.

AND I WOULD VALUE YOUR COMMENTS: You can reach me and others in our local farm-preservation organization via the “contact” link on the menu above, to the right.

Along with so many others, I am appalled to learn of the recent proposal — from none other than your Agricultural Minister — that the Agricultural Land Commission’s mandate be “expanded” to take “economic development priorities” into account (specifically those of the oil and gas industry) and that some of the Land Commission’s powers in the north should be switched over to the Oil and Gas Commission.

Shockingly — as quoted recently in the Globe from a document on government letterhead — the Minister’s proposed changes go even further, relating to the whole of the province.
The Minister’s specific proposals are:
— “Modernize” the ALC decision-making to reflect government priorities.
— Create two ALR areas with different rules.
— Change the ALC’s legislative mandate, in one or both ALR areas.
— Remove some decisions from the ALC.
— Allow community growth applications to be decided by local governments.
— “Modernize” ALC operations by moving the ALC into the Ministry.
All this is proposed at a time when the world’s food supply is in peril — in a province where less than 5% of the land is arable, and faces constant pressure from industry and developers.

Premier Clark, if “economic development priorities” are of prime importance to your government, I trust you recognize that with its $10 billion a year contribution, our agricultural sector is British Columbia’s prime producer of truly renewable energy. The preservation of agricultural land brings economic benefit not only of employment, health, environmental protection, and tourism. It also ensures sustainable food supplies for a future threatened by world over-population and drastic climate change.

Thank you for your attention, Premier Clark. It is highly unsettling that your cabinet minister entrusted with this important sector should be the voice suggesting measures to weaken agriculture in our province.

I hope the citizens of British Columbia can look forward to your firm commitment to strengthen the Agricultural Land Commission, and to reject Minister Pimm’s dangerous proposal.