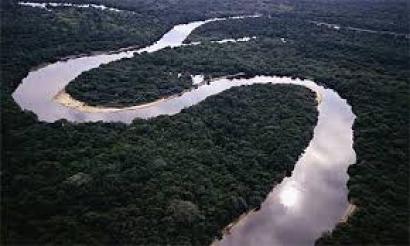 My friend the painter Alison Watt commented the other day, on the fact that while Amazon Books grows and grows — most recently gobbling up Goodreads – “the real Amazon shrinks daily.”

I was struck by that comment. Ironic indeed. The Amazon Basin’s life-breathing forests, the “lungs of the earth”, are being stripped for purposes of mining (often Canadian companies involved), oil production (ditto), cattle farming, soybean culture, “forestry”: the irreplaceable eco-system sacrificed even, (super irony here) to be turned into the pages of books.

Not to mention the loss of species so far not yet discovered, and plant-based medicines and the knowledge of them swept away, as the traditional cultures of the area are forced willy-nilly into “modernization”.

But last night I had a dream. The colossus that has named itself after the world’s fastest shrinking biological reserve woke up from a nightmare of his own — kind of like Scrooge — and said “Hey, what’s going to happen when there isn’t air even for the likes of me to breath?” It was so beautiful, watching that multinational corporation transform itself into the Friendly Giant and give over great leafy armfuls of his earnings to rescue his namesake, and then pledge oodles more….

Ah, dreams, dreams. But then again, who knows what (ultimately self-saving) seeds of altruism might be lying dormant even in the dry reaches of the corporate world?

Meanwhile, to see some of the botanical paintings of Alison Watt, as well as her other beautiful work.
click here: