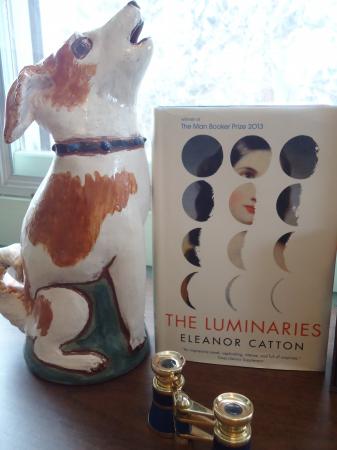 What to make of a novel that runs to over 800 pages, weighs enough to cause damage if one falls asleep, and tells a story so complex, with so many twists and turns, that in the end this reader at least is left bumbling around in the dark, bumping into knobbly plot-protrusions, shrouded allusions, and a ghost that breaks all the usual ghost story rules. This is in New Zealand of course. Water runs the wrong way down the drain there, too.

What to make of my reaction to all this, when the novel in question has just scooped up not just the Booker, but the Governor General’s Award?

Could I really be so wrong, on reaching page 831 — “In which” the omnipresent narrator (mustache twirling in the manner of Hercule Poirot) gathers all the plot lines into one long paragraph purporting to illuminate every dark corner — in wondering whether we’ve been bamboozled by the Booker?

And yet, and yet, I did follow along to the end — eager to pick the arm-buster up again every time I’d given my brain a little rest. For this is a novel requiring both brain and brawn. You can put the Sudoku aside; you won’t have to do any other brain-boosting puzzles for the duration. Challenge enough to keep all 20 characters straight, along with their back-stories and predilections, dastardly and other wise.

E.M. Forester, in Aspects of the Novel, talks about the need for characters both “flat” and “round”. The curious thing about The Luminaries is that almost every character is oddly round and flat.

The forward motion stops each time someone new comes in, and we are given so much information that we assume (the first few times at least) that this is the personality on which the whole thing will hinge. There he stands (they are all men for the first goodness knows how many chapters; we are allowed mere off-stage glimpses of two women who are, admittedly, extraordinarily vivid when the finally appear). So there he stands: the young lawyer arriving fresh from Edinburgh to make his fortune in the gold fields; or the hotel owner who runs a string of prostitutes; or the Chinese opium dealer; or the seasoned “digger” in his red bandana and moleskin pants. There he stands plump with everything we have been told about his past, his future hopes, his inner complications; and no sooner do we get a grip of him than he flattens into the shadow of the next assiduously rounded-out character, where the whole thing happens again.

And yes, I was snagged by brilliant glimpses of human qualities, as the narrator led me into the throng. But if reading Proust has always felt to me like eating chocolates with the wrappers on — crunching through those long sentences to the moment when the sweet-tooth hits another perfect nugget — with The Luminaries it’s like finding oneself bounced along an almost endless bon-bon buffet: how on earth to digest all this, and what was that last flavour? ~
But if we revert to the wisdom of E.M Forster, a great novel can be flawed — even egregiously so — as long as the writer has the power to bounce the reader into accepting what it says.

And without a doubt The Luminaries bounced me on such a vividly realized voyage that I could never resist coming back for more: in particular, for the many details about the rush for gold — the all-consuming lust for gold — in that far south island of New Zealand at a time when society there was barely forming.

It became addictive to join this cast of characters in quest for a “homeward bounder”; a nugget the size of a snuff box, or a sack of precious dust heavy enough to ensure a fortune back in the “old country”;  to enter the saloons and offices and banks, spy on the doings in bordellos, experience the endless misery of damp and mist and chll on the banks of rivers and streams where the fabled dream dust glitters.

It was such twisting-and-turning (and very long) adventure, that I feel almost churlish, at the end, to say, But I wanted more. I wanted this to end up making sense. I wanted my own homeward-bounder: a golden moment of AHA!

Instead, even with the help of the astronomical charts which our narrator implies are central to navigating this mystery (having found myself irritated, in fact, all along, by the obscure cleverness of those charts) I’ve been left with the discomfiting realization that the convoluted plot threads were actually spinning a yarn.

That like so many of the characters in the novel, I too have been lured — by razzle-dazzle — across a glittering landscape of improbabilities.